For Christmas, Ciate put out a nail polish advent calendar. Every day you'd open a door and there would be a tiny (5ml/0.17fl. Oz) bottle of nail polish.

Can you imagine? Tiny nail polish! Christmas come early! Unfortunately, it was also a bit expensive for me, so I passed on it. But then, some months later, it popped up on Catch of the Day! ...which I realised after the deal had expired. But this story has a happy ending, because it came back as a Returned Deal, and it was third time lucky. (And on sale, at that.)

For this manicure, I used Hopscotch (orange) and Chinchilla (blue-grey) to create a chevron mani. 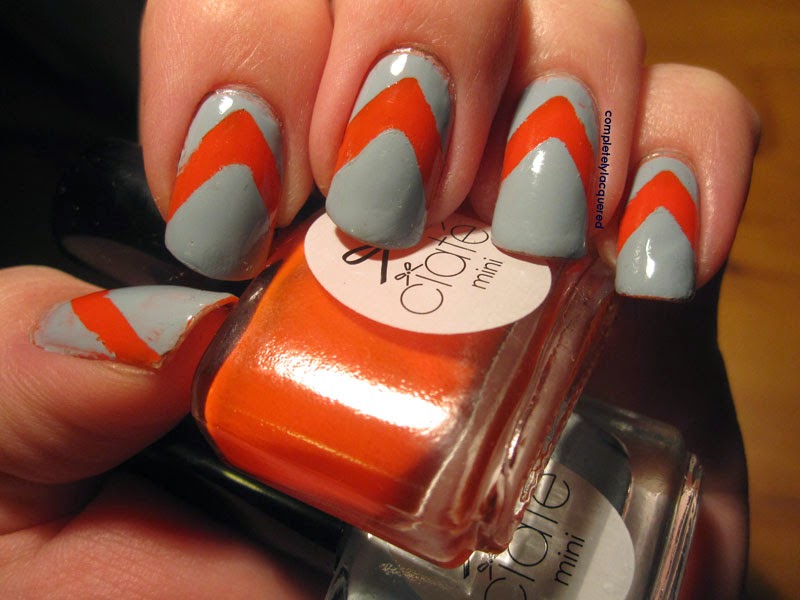 I had a difficult time with this manicure, probably due to the fact that I did it sitting riiiiight in front of the heater (Canberra's winter has arrived for real this time!) and the shorter brush, due to the shorter bottle. To be fair, the brush itself is normal sized, but the shorter handle was harder to use.

Anyway, it's definitely a rather messy mani, but the colours did go nicely together. A very editorial look.
Posted by completelylacquered at 21:45