31 Day Challenge - inspired by a flag

Am I the only one who finds this a bit of an odd prompt? Although I did love seeing everyone's take on the theme last year!

A few days ago I went on a tour of the US Embassy here in Canberra. We saw some beautiful buildings, including the inside of the ambassador's residence, and toured the grounds. It was great. At the end we all got a show bag with a bunch of American themed items (American flag pen! American flag fan! American flag grill glasses!) and I just had to pay homage to America's enduring love affair with its flag. And it was a good chance to use some of my unused stamping plates... ;) 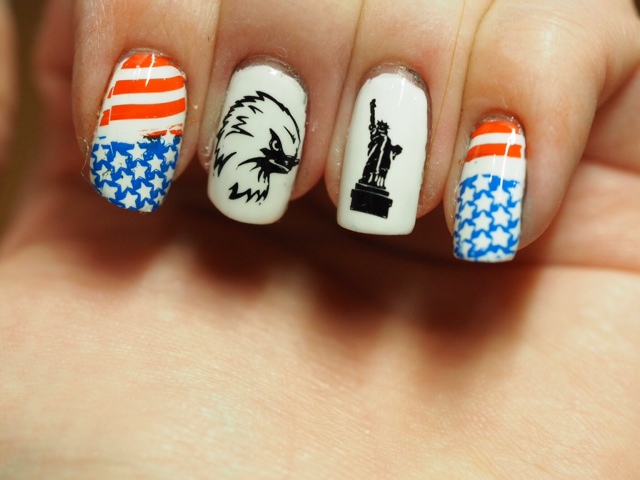 I painted my nails white with Essence's Wild White Ways, then stamped using plates BM-H25 (for the abstract flag and the eagle) and Winstonia W114 (for the Statue of Liberty). I used Mundo de Unas stamping polish - originally I used "Red" on the stripes, but it was a bit thin so I switched to "Reddish" instead and got a better result.
An InLinkz Link-up
Posted by completelylacquered at 23:45